Underneath This had the enjoyable experience of interviewing writer/director Marina Rice Bader. Please read more about Marina (adapted from a press release) and her latest film, Anatomy of a Love Seen, before proceeding to the interview.

Marina (Executive Producer of Elena Undone, A Perfect Ending) is releasing her feature length directorial debut Anatomy of a Love Seen as a $5 digital rental on Vimeo via the film’s website http://www.anatomyofaloveseen.com  Marina has given the film its worldwide release as a streaming rental, breaking outside of and bypassing the traditional Hollywood distribution channels. Anatomy of a Love Seen  is easily and available and affordable for fans to view around the world on any Internet-capable device. Additionally, subtitled versions for a number of languages will also be made available including Spanish, Portuguese, French and German.

In the age of YouTube and viral marketing campaigns, it is becoming less uncommon for a feature to be completely digitally released; however, it is quite unusual for a movie to be made available online immediately after a festival premiere, as this film has following the recent 32nd Annual Outfest Los Angeles LGBT Film Festival. Yet in keeping with the “do-it-her-way-ethos”, Marina was intent on the idea of exploring alternative distribution options in order to engage and connect directly with her fans, and get the film out to as many people as possible.

Following in the footsteps of filmmakers such as Louis CK and Joss Whedon who have taken on distribution themselves, Marina isn’t the first filmmaker to the direct-distribution game; but she is one of the first ever out filmmakers to offer LGBTQ+ audiences around the world and cinephiles alike a lesbian themed feature film as a low-cost digital release immediately after its first festival premiere.

As the driving force behind Soul Kiss Films, her independent film company, Marina’s artistic direction is focused on one goal:  to create evocative, entertaining, and compelling movies by women, for women, and about women.  Indeed, she is successfully planting the seeds to do just that with Anatomy of a Love Seen, the forthcoming Raven’s Touch, and a new film set to shoot in December.

Anatomy of a Love Seen stars Hollywood newcomers Sharon Hinnendael, Jill Evyn and Constance Brenneman.  This film within a film explores love in all its painful and messy glory.  Six months ago, Zoe and Mal fell for each other while filming a love scene, which led to an intense, whirlwind affair, followed by a devastating breakup. Soon after their split, things get complicated when the two have to meet on set once more to re-shoot that fateful sequence.

Filmed in five days, this improvised movie based on Marina’s story, characters and outline fulfilled her desire to create a very organic and visceral experience.  Anatomy of a Love Seen was made on a micro-budget, but that hasn’t stopped a huge online buzz. For a preview of the film, you can view the trailer (for mature audiences), which has already had 780,000 views, here: https://www.youtube.com/watch?v=zWqQregDD_A

ANATOMY OF A LOVE SEEN IS NOW STREAMING WORLDWIDE AT:  http://anatomyofaloveseen.com/ 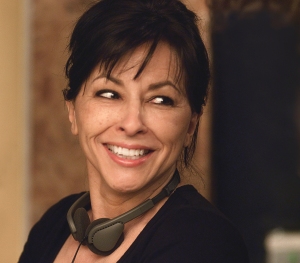 What was the moment in which you realized you wanted to work in film?

It was a long series of moments in my life that led me to where I am now and my decision to work in film. It probably goes back to elementary school in one way or another, though it never had a name. I lived my life as a movie, always coming up with new scenarios to play out in my head. This stayed with me my whole life, and I still do it. It wasn’t until I was in my 50s that I found the confidence to actually jump in and pursue my dream, corny as that sounds. I’m a big believer in “it’s never too late.”

Who and what have been the most significant creative influences?

Movies! I adore leaving the theater or my living room to enter the world created for me. My favorite films have a way of taking me somewhere I’ve never been before. The Princess Bride to a land of swordplay, giants and true love. Lord of the Rings to a world of elves, middle earth and the epic battle between good and evil. Connie & Carla to the stage of song, dance, drag and just plain fun. Aliens to the outer reaches of space and the most badass hero of all, Ellen Ripley.

From your perspective, has there been progress, regression, or both regarding depiction of LGBTQ+ individuals in the media?

I think there’s been a steady rate of progress, and certainly there are many wonderful characters now living on prime time and cable. We could use more films with well-rounded LGBTQ+ characters, and I hope in some way I’m helping to address that issue.

You are debuting as a director with “Anatomy of a Love Seen.” What have been some rewarding and challenging moments of being in the director’s seat?

I think my biggest reward so far has been actually getting through the many challenges of creating a film from start to finish. I take on a bit of the producer role as well, in that I love putting all the pieces together. I had my hands on every part of the film, which was fantastic. Working with my amazing cast and crew was incredibly rewarding – every day they blew me away with their dedication and passion. Then there’s sitting with an audience, watching your film on the big screen…that’s pretty cool. 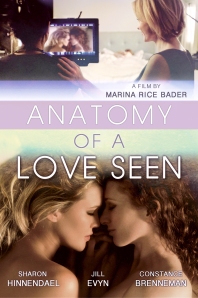 This film has been released internationally streaming online. How did you make this decision?

I wanted to try something different this time – to see if I could make the film accessible to the entire world at the same time – to include everyone. As of this moment Anatomy of a Love Seen has been viewed in 70 countries – how mind blowing is that? Everywhere from Canada to Costa Rica, Norway to New Zealand, and the film is available in five languages with more coming. Now it’s a matter of getting the word out there! We are streaming everywhere right now: http://anatomyofaloveseen.com/

How do you see technology continuing to influence film-making?

Technology is not my area, but I do see it continuing to move in the same direction, which levels the playing field a bit by allowing filmmakers to create and release content more easily.

In some ways, the film seems meta, in the sense of showing a movie within a movie. How were you able to capture this on screen?

Now that was interesting! Our working crew played the movie crew, the actors were in character at all times, and everything was fair game. This was a two-camera shoot, so you never knew if B camera was rolling on behind-the-scenes (some of which ended up in the film.) I think Kieran, my first AD, had it the hardest. He was my right hand on the set and the one responsible for keeping us on schedule, making sure we got all of our shots, but was also playing a real character in the film, with dialogue! He rocked it though…and he’s absolutely adorable in the film.

How do you choose the music that is included in the films?

We had a wonderful composer from The UK named Thom Robson who created our original score – he’s one to watch out for. Then we were lucky enough to find Canadian singer/songwriter Sarah Smith to provide two songs, which rounded us out. Can’t wait for the US to discover her – we created a music video with Sarah for our film, which has gotten rave reviews – you can check it out here: https://www.youtube.com/watch?v=t34zwvEekeA

Which projects are you working on next?

“Raven’s touch”, starring Dreya Weber and Traci Dinwiddie, is going through the final edit and should be ready to go this fall. I’m also in the beginning stages of a project that will shoot at the end of this year – the details are under wraps right now. Then in the fall of 2015 I’m shooting one of my favorite stories called “Red Sky Theater” in Arizona. This one’s been in my heart for a long time and I can’t wait to get started!

What insights do you have for aspiring filmmakers?

Well there are a thousand possible answers to this question, but the best tangible piece of advice I can think of is this: do something that really scares you, and I mean something that makes you want to cry just thinking about it. Terrified of snakes – go hold one at a pet store. Afraid of the dark – go spelunking in a deep dank cave. Terrified of heights – go ziplining. Once you conquer that fear, then make a movie, because to survive in this world you must be fearless!