Underneath This had the enjoyable experience of interviewing Scarlette Fever, a talented musician. Please read more information (provided by her publicist) about Scarlette before proceeding to the interview.

Following sold out London shows this summer at Borderline and Islington’s O2 Academy2, Scarlette Fever has confirmed details of her brand new single ‘Helena’, the title track from her upcoming EP, both out September 21st.

Produced by Paul Simm, who co-wrote six tracks on Neneh Cherry’s recent album, (Plus Amy Winehouse, Groove Amanda & Tom Jones, Massive Attack) ‘Helena’ is a huge leap forward in sound and song writing for Scarlette, and marks the beginning of an exciting new chapter for the acclaimed singer songwriter.

“It is definitely a new direction but that hasn’t been a conscious decision,” says Scarlette. “It’s just where I am and what’s ringing my bell musically.” And the song’s meaning? “It’s about falling madly in love, madly in lust and everything in between. About finally understanding what all the fuss that Shakespeare made was about.”

Elsewhere on the EP are three other new songs, the stunning, previously unreleased ‘Piece Me Back Together‘, and two live favourites, ‘6ft Woman‘ and ‘P.S. I Hate You‘– so far only released in their remixed form on Scarlette’s recent dance EP, ‘Return of the Fever‘.

So far in 2014, Scarlette has been busy touring and in the studio writing. She released the aforementioned ‘Return of the Fever’, a 4-track remix EP and also a stunning cover of the Erasure classic ‘A Little Respect’, put out to celebrate the legalisation of same-sex marriages – a momentous occasion close to Scarlette’s heart. Her live shows have continued to build momentum, with sold out shows at Islington O2 Academy2 and The Borderline. Elsewhere this summer she’ll also be appearing at Beautiful Days Festival and Greenstock Festival in August and Hoxton Bar and Grill (4th September), returning to Islington’s O2 on 17th October – with more dates in the pipeline.

Scarlette is also honored to now be an ambassador for the water charity, Fresh2o, alongside the likes of Will Smith, Keira Knightley, Janet Jackson, Lily Cole and more. The charity’s mission is to reduce poverty, improve health and prevent heath by enabling the provision of clean water for drinking and sanitation purposes globally. It was founded by Oscar-award winning photographer Candice and is currently raising funds for seven village wells in Madagascar. Scarlette has recently performed at one of their exclusive fundraising events and her role as ambassador will raise awareness of the charity and their life saving work.

Scarlette Fever came to the fore in 2011 and built a solid fan base following live support tours with Lisa Stansfield, Caro Emerald, Mike + The Mechanics and Roachford. Throughout 2012 and 13 the band performed regularly in and around Los Angeles and the West Coast, whilst ‘Crash & Burn‘ was synched on VH1 USA; Scarlette Fever enjoyed continued UK media support in the form of consecutive BBC Radio 2 playlists for previous singles ’Crash & Burn’ and ’Elated ’.

‘Helena’ is out 21st September 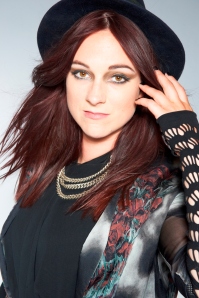 Please describe your path to becoming a musician.

Now that’s a question which could take some time to answer, how long do you have?! 😉 It has most definitely been an interesting journey! It all began when my mum bought me a karaoke machine for my seventh birthday, I got my first taste of singing and was immediately hooked. From that point onwards, my childhood was spent consuming all the music I could, studying singers and trying to emulate them. As much as I dreamed of becoming a singer, I had no idea what that meant or how to make it happen. After studying Science and Maths at A-level, I decided to take a gap year to pursue my passion. I sang at weddings, Army barracks, met producers, went on courses, started learning the piano, wrote songs and the gap year kept increasing. That’s what’s so exciting about music, there’s always more to learn, more to obsess about!!! I only started to play the guitar a few years ago and I’ve just bought myself a bass ukulele. I’m not sure what’s next but I need to grow some more arms and fingers.

You were named after Karen Carpenter. Has her music been influential, and what are your other most significant creative influences?

Karen Carpenter has most definitely influenced me and continues to inspire me. When I love a singer, I become a bit of a stalker; I read about them, watch videos of them, listen to them and really try to get to know them and their music. Aside from Karen, I love ladies with big hair and big voices. Dusty, Tina, Aretha, Whitney, Ella Fitzgerald, Sarah Vaughn, P!nk, Annie Lennox, John Lennon (he did have long hair) have all been big influences. I guess the biggest creative influence has been my mum – aside from listening to me sing renditions of ‘Lady in Red’ for hours at a time in the early days, she’s always encouraged me and pushed me to strive to be the best I can be.

How does being from England influence the music that you make?

Ooo that’s an interesting question!!! Growing up, nearly all of the music I listened to was courtesy of my mum and she definitely had a taste for American music, far more than English. She bought me up to have a very eclectic taste in music; we listened to Elvis, loads of Motown, Aretha and whatever else she put on her mix tapes. Even as a teenager when British bands like Oasis and Blur were all the rage I gravitated more to the big belters from across the pond (Celine, Mariah, Whitney). At that time, I was a singer and was only interested in Craftsmen/women at the top of their game. I’m often told that my melodies and music sound American which I suppose makes complete sense when you read this interview! Since picking up a guitar, I think I’m more aware of British influence and generally I like to add a pinch of that staple Brit Indie guitar sound that we all know and love thanks to Coldplay and Snow Patrol.

Before releasing albums, you were a wedding singer. What was that experience like?

Amazing!!!! I loved it and always felt very honoured to be a part of peoples’ big day. Singing a 3 hour wedding gig is like intensive vocal body building but I can’t lie; if I never have to sing Play that Funky Music again it will be too soon!!

I read that your debut album, “Medication Time” was entitled after a line in the movie, “One Flew Over the Cuckoo’s Nest.” That is really interesting. What kind of films inspire you? In which movies would you want your music to appear?

I LOVE films!!!!! I guess I love stories in general. When I write lyrics I always see a scene in my head and until I do I can’t write. There’s an amazing scene in ‘Black Snake Moan’ which really inspired me to write ‘PS I Hate You’. Visually beautiful films inspire me, and those with great stories. It’s my dream to work on a film score and to have a song appear in a big Hollywood Epic.

Is your song “Single White Female” named after the 1992 film? If not, what was the inspiration behind that song?

The inspiration behind ‘Single White Female’ was an amalgamation of a few things; Ertha Kitt on Jules Holland (I thought that it would be fun to create that character in a song), being a SWF on a few dating sites and yes a touch of the nutter from the film.

Your style has been described as acoustic pop. What do you make of that designation?

Designations don’t really interest me; as far as I’m concerned, from Frank Sinatra to Josh Wink, it’s all popular music.

How do you think women are treated in pop music circles these days?

Speaking from my own experience, like most things in life it depends upon the individuals involved in a situation and the circumstance. Behind the scenes I mostly encounter men, I’ve never met a female producer, sound engineer or drummer come to think of it!! Early on in my career I had to fight against the men’s club mentality and attitude that as a female singer my job was to basically sing nicely, look pretty and leave the complicated stuff to the boys! It can be very intimidating stepping into what can sometimes feel like ‘the boys’ room’ and when I was younger it really affected me. Trust me, it doesn’t anymore!!

Is your music feminist? If so, in what ways?

I try to write empowering music regardless of gender. Of course I am also a woman so I’m sure that there are feminine undertones.

How do your social and personal identities affect the music that you make?

I always joke that Scarlette Fever is a superhero who I become when I go onstage, but when it comes to making music, every song that I work on contains ‘me.’ Even if the lyrics aren’t necessarily about my personal life or I’m working on a cover, I put my all into everything I work on.

One of my favorite songs by you is “Hour of Sunshine.” What is the story behind that song?

That’s a song that is quite rare in that it isn’t about a specific situation in my life. Julian came up with a great riff on the guitar to write to and Jason came up with the first couple of lines of the chorus so we all created a story around that.

What is the meaning of your song, “6 Foot Woman?”

I was playing around with the idea of a song called ‘6 foot woman’ for a long time before Chris and I actually wrote the song. The idea came to me initially because in heels I’m about 6”2 and if my shoes are really big I often feel like a drag queen. In fact, my sister always says that I’m a drag queen trapped in a woman’s body.

You have co-written songs with a wide range of artists; what has that process been like?

I love it!! It’s how I continually learn and grow, there’s always something to learn or new to experience when working with different people. It helps keep writing fresh and interesting.

Which song is most meaningful to you perform live?

Crash and Burn. It’s the song that most represents who I am and what I believe.

Which projects are you working on currently?

I’m so excited to be adding the finishing touches to my latest album, I’m so proud of it!

What insights do you have for aspiring musicians?

Try, try, and try and if that doesn’t work get up and try again.