Underneath This had the pleasure of interviewing Jessy Spino of the talented band Girl Fry. Please read a brief bio about Jessy written by Jeremy Porter.

Jessica Spino (born Jessica Espinoza) is an American and Brazilian musician and songwriter. She co-founded the band Maria Sweet at the dawn of her musical career and later went on to found the melodic punk band Girl Fry. Her musical stylings are influenced by the wide variety of culture she was exposed to growing up in southern California, Brazil, and Ecuador. Spino has shared stages with a wide array of artists including Killola, Tsar, Anus Kings, Evertheory, The Walking Toxins and Sangre, and has achieved recognition for completing Maria Sweets first tour solo when the rest of the band had to cancel. She is also known for often including traditional folk instruments in her compositions and performances. As of July 2014, she has three official releases including an EP and Album with Maria Sweet, and an EP for Girl Fry – with a new album slated to be released in Q3 2014.

Well, Alex was born into a musical family and had access to every kind of instrument you can imagine. I (Jess) would sing in church. I played piano as a youngin’, and started guitar at age 14. I sorta realized that this was what I wanted to do once I left high school. It took YEARS to convince Alex to start a band with me. But she couldn’t until after Art School. And so Girl Fry started a little while after she graduated.

From your perspective, how are female-bodied people treated and viewed within punk and pop circles these days?

I was actually talking about this tonight with a friend. About how I didn’t expect to be asked such substantial questions in our first band interview. I joked, “I should be showing some skin, not doing an thoughtful Q&A’s!” and that sort of answers the question itself. When outside of radical spaces that try to create a safe environment, I see some transphobia and objectification, yes. However, my biggest pet peeve in the industry is that FAAB’s (female assigned at birth) are often pitted against one one another. Even amongst the band members themselves. It’s the There Can Only Be One attitude. 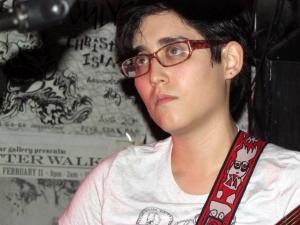 So far, what has been some highlights of performing live?

The highlights of this past year for Girl Fry have been getting to perform more unplugged, acoustic sets. This really challenged our performance skills, and has made us into better musicians. We all have become so much more aware of each other’s cue’s and styles.

How do the three of you collaborate to make music?

For so long it had just been Alex and I (Jess), much of our collaboration is with rhythm and the vocal interpretation of each song. Sometimes Alex contributes to writing and guitar. Most of the time, I write a song on guitar/Charango, put it to lyrics, and take it to Ally (drummer) and Alex (bassist/rhythm guitarist) for further development.

What is one quality that makes you distinct from other artists who may be sonically similar?

I tend to write verbose songs, and try to make lyrics melodic whenever I can, even if that means sacrificing rhyme or meter. As for Alex, you might notice in our upcoming album, she has laid down some very busy bass patterns.

Who and what have been your most significant creative influences?

My best buddy, from whom I have written dozens of songs. My dog, for whom I wrote many songs in my previous project, Maria Sweet. I take a lot out of my favorite sci-fi books and television shows: Star Trek, BSG, The Sphere.

Whom do you most admire musically?

When I was younger: Metric, Tegan and Sara, Dresden Dolls, Evanescence. More recently, Against Me!, The Stranglers, The Lunachicks, Los Hermanos, even bands like Avatasia, Dream Theater, Minds Eye, Kamelot, the list goes on. Alex is more on the rockabilly, roots hardcore, and electronica side, but she isn’t here so I’ll just mention Henry Rollins, Vandals, The Heavy, The Circle Jerks, Above and Beyond and that list is longer than mine.

I love your song, “Just Wondrin’” off The Pottymouth EP. You have so well blended melody with a punk spirit! How did you do it? 🙂

I love punk, and I love a good melody. I’ve always found the two to fit together nicely. A favorite example of this is Subway by the Lunachicks.

Your song, “Memo” off the same album seems quite confessional (e.g., “Unload the weapon before calling/And my parachute works before falling) What is the story behind that song?

It’s about descending into madness. Trying to have all your ducks lines up, but everything falls apart at ignition.

“Surivalov” sounds somewhat different stylistically. What is the meaning of this song?

My goal was to use the Charango more traditionally. The first song I had ever heard Charango being used is this classic titled Ojos Azules. Some of these classic renditions from the Andean region can have a super upbeat energetic sound, many of them change tempo, this one in particular has a sadder theme. I was trying to follow those themes to the best of my ability, but it turned into something different. Maybe I was missing some flute? I love that song, even though playing it makes me sad.

Which songs have you or would you like to cover?

A friend once told me that the best songs to cover are songs outside one’s genre. I would love to cover Abba. In the past, I have covered Black Sheep by Metric, Have to Drive by Amanda Palmer, Bullet by the Misfits for live performances. Most of them were at an open mic somewhere, so there aren’t any vids of it, thank goodness. 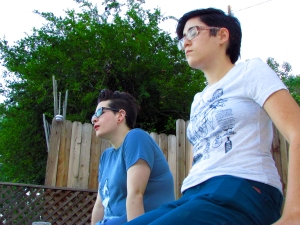 What has been the most surprising reaction to your music so far?

At the Viper Room, I performed a cryptic, naughty song that someone totally picked up on. They laughed and pointed directly at me.

On what projects are you working on next?

We have a 10 date tour on the west coast to promote our upcoming album. You can see our tour dates here: http://www.girlfry.com/shows. The album should be coming out soon after the tour.. We are recording at ATM Studios in Burbank with our producers Victor Flores and Joe Calderon: http://www.atmstudios.com.

Lastly, In our spare time Alex and I have been working on a the studio’s Electronica side project called Dark World. You can hear our progress at https://soundcloud.com/art-thru-dark-records/bruja.

It’s been a busy year!

What insights do you have for aspiring musicians?

You are an asset, and your time is valuable. And to Women, Feminine-Identified Persons, Queers: Keep being awesome. The music industry needs more of you.