Underneath This recently had the enjoyable experience of interviewing Francisco Lorite. Before proceeding to the interview, please read more about Francisco.

Francisco Lorite rose to fame writing and directing the ten-minute dark comedy called “Cuco Gomez-Gomez is Dead!” The no-budget piece ended up screening over 150 times in the US alone and got sold for broadcast. It also won five awards –including the prestigious Imagen Award for Best Theatrical Short, “Best Cine Latino” at the DC Film Festival, “Best Edited Short” at the 2005 Manhattan Short Film Festival, and a Special Jury Honor presented by Edward James Olmos at the Los Angeles Latino International Film Festival. Shot in four days on a $1,170 budget, post-produced on a laptop and executed without a crew, the short received much press because of its visual flair as well as Francisco’s unusual guerilla filmmaking approach: He asked his actors to be his crew, and to pitch in $100 each to jump-start the film.

In the end, Lorite created more than a buzz with his multiple-award winning “Cuco Gomez-Gomez is Dead!”; he created a phenomenon – a short that enjoyed the life of a feature film and definitely served as the ultimate Hollywood calling card for Lorite.

Thanks to Cuco’s success, Francisco was hired to write and/or direct a series of comedy specials and various TV pilots. He also started taking on writing assignments from producers, while continuing to independently create his own material such as the revenge film “Random”, and the dark thriller “Fierce.”

Bringing a unique passion to his craft and desire to make his mark, Lorite is one talented filmmaker who’s already on to something in 2014 and definitely one to keep an eye on.

To learn more about Francisco and his work, please visit: 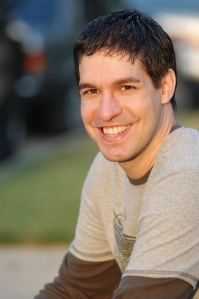 When did you first realize you wanted to become a filmmaker?

I did go through a very early, very short (and very unrealistic, even by today’s standards) cop/cowboy/firefighter phase. But even as a child, I liked making up stories. I remember other kids in the neighborhood asking me to tell them stories, after we were done playing the other games – and I did. We’d all sit in a circle, on the playground, and I’d start talking. Shortly after that, I began writing and drawing my own comic books. Films followed quickly – I made my first one at 14, with an old Super8 camera I found.

Which films have inspired you the most?

Endless list. Mainly because I watch movies all the time and have been doing it since I was 13. Certain films I like for sentimental reasons – I saw them as a kid and watching them now reminds me of the joy I felt when I first discovered them. Other films I like because the stories they tell move me and excite me in some way, or inspire me to go out a shoot a movie of my own.

The abridged and weirdly eclectic roll call would have to include (in no particular order): Blade Runner; Citizen Kane; The Good, The Bad & The Ugly; Pulp Fiction; Fight Club; My Name Is Nobody; The Conversation; Magnolia; Clockwork Orange; Memento; Airplane; The Shining; The Terminator; Thief; Enter The Dragon, Drive; Young Frankenstein, Seven; and countless more.

How did growing up in Spain influence you as a filmmaker?

I’ve lived in some great cities, both in Europe and the US. (And I hope I will live in a few more.) My roots are in Spain because my whole family comes from there. My mom did a great job opening up my and my brother’s horizons and gave us a taste for travel and exploring other cultures. All the above makes me multi-cultural. I believe that’s a definite plus, when it comes to my story telling and what I can offer as filmmaker.

What was your experience like moving to the United States and working as an actor in New York City?

Exhilarating. Like a dream. Imagine that – small town boy arrives in America! I didn’t know anyone here, had flunked English before leaving Europe. It was an adventure. Sometimes a lonely and frustrating one, too. I wasn’t sure if I would end up staying for good but I was determined to make the most of my visit – however long or short it might turn out to be. New York City was good to me; I was lucky enough to make a living as an actor there and I still miss performing on the stage. But I needed to create my own stories from scratch; so, I became a writer-director. Hollywood was my next stop.

What stereotypes about Latinos are still perpetuated in the US and world media? Are there ways you have addressed those in films?

Progress has been made but we have a long way to go to even reach a balance. It is not about looking at the world through rose-colored lenses but, at least for me, it is about depicting the whole spectrum of the truth – not just one reductive (and often distorted) aspect of it, over and over again. My films are an extension of who I am and therefore they are also multi-cultural. The characters I create come from all walks of life and ethnic backgrounds – some are good, some are bad and some are both. All of them, though, are fleshed out and play a part in telling the whole story. Just like in life. I also enjoy flipping expectations and, whenever I can, cast against race or even gender.

How do you see the relationship between media and activism?

All media contains the possibility of activism because the stories we watch, hear or read –in the form of films, TV, articles, Tweets and even text messages– shape our thoughts and therefore who we are. Even the most commercial of movies contains some sort of message buried in there, under the explosions and flying capes. It might be a simplistic message but it’s there.

After moving from New York City to Los Angeles, you made the film Cuco Gomez-Gomez is Dead! on a small budget and in a short time frame with actors you had worked with previously. What did you learn from that experience?

Regardless of budget or equipment, if you have the chance to shoot a movie – don’t hesitate and do it! The entire lighting package for CUCO was a paper lamp at the end of a broom handle and our post-production facility was the editor’s laptop. It was made for less than $1,200 and we were very fortunate to win 5 best-of awards with it.

The short film Mediation is the first project released by Top Rebel Productions, the company you began with Freddy Rodriguez and Bill Winett. In 14 minutes, you were able to tell a compelling story that captures a wide range of emotions. I thought your technique of using flashbacks was very effective. How did you approach writing the script? Were there experiences that inspired this film?

First of all, thank you for the kind words. I am thankful people are responding well to MEDIATION. We were actually planning to shoot a different film, at first. But we had to shift gears when the company that had committed to do all our VFX, suddenly went bankrupt. I asked our producer Bill Winett to set up a meeting with our investors so I could pitch them another idea and convince them not to withdraw their financial support. Fortunately, they liked the new story. That’s how MEDIATION got made. I wrote the script very quickly after that and we managed to keep the same shooting dates.

On which projects are you working?

Top Rebel Productions is developing several film and TV projects. Some I have written and plan to direct; others we will be producing with very talented collaborators. The movie that is moving toward a 2015 shoot is called CARGO; it’s an action-drama with light sci-fi elements and some interesting themes. It’s one of my scripts and I look forward to directing it.

What are some of your interests outside of film?

What insights do you have for aspiring filmmakers?

I can only pass on the advice that was given to me at two crucial points in my life by people clearly wiser than me: 1) “Remember who you are!” (I actually made a poster of this one, it hangs by my desk) and 2) “If you have the choice between making a film and not making one, get off your ass and go make it!”

Thank you for your time and your interest in my work!