Underneath This was excited to interview Miss Alex White from the band White Mystery. Before reading the interview that follows, please read more about the band from their self-penned bio and check out their new video “Dubble Dragon” from their double album of the same.

Please check out WHITE MYSTERY online at the following sites: 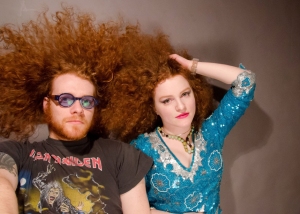 Check out the video here.

Directed and produced by Alxis Ratkevich & Chris Newton, the epic new music video for White Mystery “DUBBLE DRAGON” guides you around Chinatown in Los Angeles, to a mystical shop (hosted by legendary drummer Don Bolles from The Germs and 45 Grave), into a psychedelic performance by the brother-sister rock’n’roll duo; all through the eyes of a young boy, Tomek Adler. Miss Alex White & Francis Scott Key White are launching their European and North American tour; see the shows here: http://www.whitemysteryband.com/shows.

Please describe your path to becoming a musician and forming “White Mystery.” How did you develop this name?

I saw a shiny candy wrapper on the sidewalk on April 20, 2008 that said “White Mystery — OUT OF CONTROL!” That was the day we decided to start a band.

What is it like working with your brother in the band?

Working with my brother Francis Scott Key White in White Mystery is a spiritual experience. He’s poetic, sensitive, and strong, which makes for really interesting songwriting along with lots of adventures around the world.

When I listened to your album, “Blood and Venom”, I got a punk, riot grrrl feel, for example on your song, “Good Girl.” Your subsequent album, “Telepathic” felt somewhat more rockabilly. How do you characterize your style and who have been your influences?

Wow, that’s a really interesting take on the music. Here is a diagram of my influences:

How will your next album compare to the previous records?

White Mystery “Dubble Dragon” is a double album, which is a step up from the first three albums. It’s recorded incredibly live and contains secret messages.

What was it like playing at South by Southwest this year?

It was super cool. You can see a lot of photos from SXSW on the White Mystery Facebook here: http://www.facebook.com/whitemysteryband