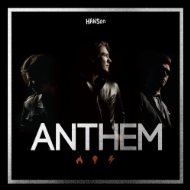 When I mention Hanson, the response I often receive is, “They’re still making music?!” If you haven’t been paying attention since the trio’s bubblegum pop hit “MMMBop” climbed the charts in 1997, you might not be aware that Hanson recently released their sixth studio album.

Anthem, the fourth album on the band’s independent record label, 3CG Records, is energetic, upbeat, and edgier than previous albums. The three brothers argued during the making of this record, and these tensions are reflected in the harder edge of songs like “Fired Up” and “You Can’t Stop Us.” The second track, “I’ve Got Soul,” has the funky, horn-filled sound of the band’s 2010 release, Shout It Out. The raw energy of the first three songs is sure to make for great live performances. However, the album begins to flow more smoothly with the fourth track, “Get the Girl Back,” a fun power pop song reminiscent of Taylor’s side project Tinted Windows. Zac showcases his strong vocals on “Juliet,” a catchy love song that is perfect for summer. Other notable tracks include “Lost Without You” and “Tonight.”

Below is the video for “Get the Girl Back” featuring 2 Broke Girls actress Kat Dennings. In an interview, Dennings recalled playing “Minute Without You” on repeat on her way to work while filming the movie Nick and Norah’s Infinite Playlist. The video also stars Dennings’ friend and fellow Hanson fan Nikki Reed from Twilight.