Today’s dating landscape has drastically changed. People are increasingly relying on texting as a means to start — and sometimes end — their romances. But, how does one navigate the waters and achieve results that lead to dates? Well, I interviewed Vanessa Taylor, dating coach, author of Text. Love. Power.: The Ultimate Girls Relationship Guide to Texting and Dating in the New Millennium and blogger at Platinum Girl Celebrity Blog. Check out what she had to say!

For men and women alike, it has made relationships very casual. People are having a lot of their communication take place over text — everything from planning dates, having arguments, to breaking up. People spend more time getting to know each other over text instead of out on dates. That is why in my book, Text. Love. Power., I recommend that women limit the “pen pal” conversation with men. If he isn’t asking her out on a date or otherwise doing something to move the relationship forward, he’s a time waster. She doesn’t need to respond to every text to keep his attention. If anything, it helps if she doesn’t.

What are the similarities and differences between feminine and masculine communication styles in heterosexual romantic relationships?

The only similarity when it comes to texting is that both men and women like the convenience. One excuse I hear from people who have thoroughly embraced texting is that they, “just don’t feel like talking.” Overall, though, the communication styles are more different than they are the same. Most men don’t like to have long conversations over the phone or call every day. On the other hand, many women become nervous when they don’t hear from a man every day or he cuts the conversation short. The advice I offer is pay attention to whether he asks for plans. A man might not be interested in chatting with a woman on the phone like her best girlfriend would. But, what matters is that he’s setting dates. If he’s calling everyday but not setting dates, that’s a very bad sign and a woman shouldn’t be too hopeful about the relationship. 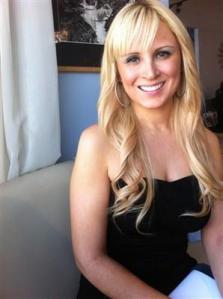 In your work, you have recommended “playing hard-to-get” for women? From your perspective, what are the advantages to doing so?
The biggest advantage is that she drastically minimizes the likelihood of being dumped. See, when a woman isn’t pursuing a man and let’s him assume the natural role of aggressor, he won’t dump her because he continues to pursue her. She’s not asking for dates, calling, talking too much about her personal life, being too available, etc. She doesn’t make a man her life right away. In turn, he doesn’t tire of her. He’s anxious to see her and doesn’t cancel dates. The benefit is that she properly sets the stage for a long-term relationship and marriage along with a clean relationship with boundaries.

How did you become inspired to write Text. Love. Power.: The Ultimate Girls Relationship Guide to Texting and Dating in the New Millennium?

For the most part, it was my clients through my dating coaching business. I was already implementing the advice that is now found in my book. I received a lot of questions about how to text for results, i.e. what to text that would make a man ask for a date. Because I was spending quite a bit of time with consults repeatedly offering the same advice, I figured there were surely other women who might benefit and decided to write it down. I assumed that if my clients were frustrated that other women were, too.

In what ways is your work feminist? Have you received any feedback from feminists about your book and blog?

In the sense that I am telling women not to pursue a man, it isn’t feminist. It also isn’t something which I care to promote. It isn’t that I don’t believe a woman should have equal pay for the same job in the work place and the right to vote, etc., but I understand men don’t like being pursued and to let them be the aggressors. I’m fine with that.

The way that it is feminist is that when a woman doesn’t see a man everyday and keeps her own life, she’s still able to make sure her work is done and professionally successful. Similar to me, I think a woman can still be a feminist even though she doesn’t pursue a man.

For the most part the feedback is positive. It’s controversial telling a woman to wait for a man to ask her out. But, women who are sick of men hurting them eventually give in and just decide to play hard-to-get. No matter what, I encourage women to follow whatever helps them achieve the best results. If they’re in completely fulfilling and satisfying relationships pursuing men, then more power to them. They don’t need my advice and that’s fine.

What advice do you have for aspiring authors?

Have your marketing plan ready and start early. Writing the book is the first part and practically the easiest. If you don’t have a means to market a book, there’s almost no point in writing one. It could be the greatest book of the year. Unless there’s a successful go-to-market plan, though, it’ll go unnoticed.